„The fire of Sumedru”, a Romanian tradition of 2000 years old

The feast of Saint Dimitrie marks the second pastoral season of the year – wintering, when nature and its creatures are preparing to hibernate until spring comes.

„The fire of Sumedru”, an old Romanian tradition

On this occasion, in Romania, there are various traditional fairs that bring together artisans and folk ensembles. Once, it was called Samedru or Sumedru and on the eve of Saint Dimitrie, a tradition dating back 2,000 years old called „Sumedru’ s fire” or „The fire of Sumedru” is kept alive (Focul lui Sumedru in Romanian). This festival is marked by a nighttime ceremonial of the renewal of calendar time, which takes place around a huge bonfire lit by youths on the highest hill in the village, in several localities, such as in Sirnea, in the region of Bran, Transylvania. Villagers call for everyone to take part in this ritual shouting „come to Sumedru’s fire”! After the fire, the participants gather coals with which fertilize their gardens and orchards. Women share pretzels, nuts and apples. The show continues with artistic moments of music and dance troupes from Bran.

This custom with pre-Christian origins is still preserved in Arges and Valcea counties, where there are held similar ceremonies of purification when they light fires on Saturday evening after dark. In old times, a stem of a tree cut from the forest was also put into the fire as a symbol of the god who dies and reborns every year. It is said that whoever jumps over fire will be healthy and marry that year.

Sumedru or Simedru, god of Romanian Pantheon, symbolically cremated in the spectacular night ceremonial of fire, took the name and date of celebration of Saint Demetrius/Dimitrie (Dumitru in Romanian) in the Orthodox calendar. Saint Dumitru is celebrated on October 26 and is the protector of shepherds. 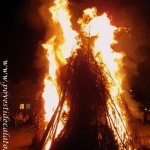